Security Owners: What Are Good Pay and Bill Rates? 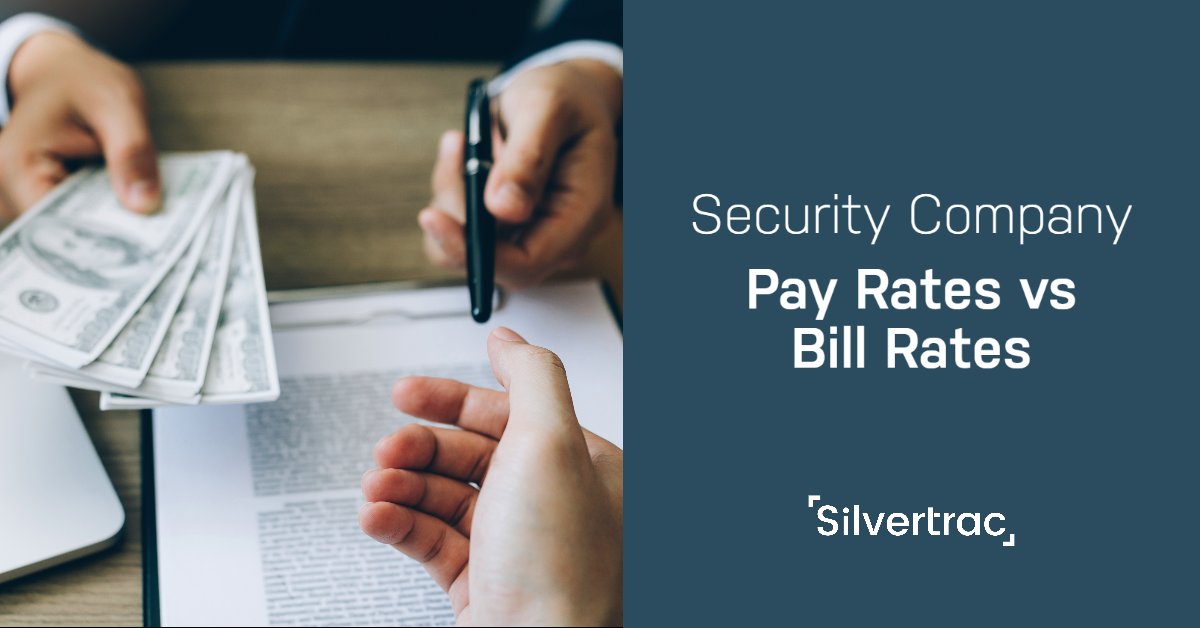 At the foundation for any contract security operation is two numbers: What you charge for providing your services and what you pay your security officers for performing those services.

Every person you ask will have a different opinion on what these numbers should be. But this article should help you make decisions about your contract security pay rates and bill rates in 5 major areas:

Trackforce Valiant put together a report on pay rates and bill rates in the physical security industry - looking at over 2,000,000 shifts of 83,000 security officers from 12,000 clients in their database. They presented a webinar with Security Magazine breaking down everything they found from the report that you can find here.

NOTE: All the data in this article was pulled from one month of payroll entries in the Valiant TLM system from December 2019. The data was analyzed and aggregated to provide a broad spectrum of trends.

The median pay rate for security officers on commercial contracts in the United States is $15 an hour. Most officers work between 20-40 hours a week, with the average being about 28 hours a week.

There are four things that can impact what a security company owner pays an officer:

The industry a security contract is in can have a big impact on what you need to pay officers. The increased risk of protecting something like a cannabis facility usually means officers get paid more.

The federal minimum wage is $7.25, but states like California and New York have a much higher minimum wage. This still has an effect even though it’s lower than the average security pay rate. Also, some states have a bigger focus in certain industries - which can drive up wages.

Depending on what services an officer is performing, they’ll require different pay, like armed guard services.

This goes without saying, but usually the more skills or experience an officer has the more they’ll be paid.

2. What’s Included in a Bill Rate?

The median security service bill rate for commercial contracts is roughly $23 an hour. There are a ton of things that go into that, but the main one is officer pay. Assuming that there are no other indirect costs, officer pay makes up about 70% of a bill rate.

Indirect costs include things like uniforms and equipment, hiring costs, officer training, and benefits and usually make-up about 10% of the bill rate.

As far as profit margins, the average bill rate is marked up by about 55% from the pay rate. After that, how big your margin is will come down to those indirect costs.

One thing that will have a huge impact on those margins is turnover. Turnover means an increase in hiring, equipment, and training costs which impact the indirect costs and cut into margins. Bottom line: keeping on officers is much cheaper than finding new ones, so make sure who you hire is quality out the gate and keep them accountable once you do hire them.

NOTE: The information in this section does not include government contracts.

So what’s causing bill rates to change more than pay rates? First, pay rates are more public. You can look at the Bureau of Labor Statistics or Salary.com to see what other companies are paying. Bill rates are part of a competitive strategy and don’t have to be reported.

State and local minimum wages and competition from other industries that hire from the same pool of workers as security impact bill rates. They are also more dependent on things like the economy, indirect costs, and the types of contracts a security company is bidding for. Those factors change more and bill rates can’t help but respond.

NOTE: Not all company data from the report shows armed vs. unarmed services. All of the numbers in this section come from a smaller subset of the larger report.

If you’re starting to think about offering armed guarding services, you should check out this article. You might think that armed guarding would bring more money into your operation, but the report shows something different.

Security companies do charge more for armed guard services, by about 9%. But, they end up having to pay armed officers much more - by an average of 23%. And indirect costs can skyrocket with expenses for equipment, training, and certifications.

Instead of bringing on more unnecessary expenses with armed guards, we’ve got a few tips to improve unarmed services:

The last area we want to talk about is government security contracts. Like armed guard services, government contracts can sound very appealing on the surface, but they might not be all that amazing.

There is money to be made in government contracts, but you shouldn’t rush in just because of the higher bill rates. If you are still considering it, check out this article for help on where to look.

If you want to see more of this information, check out our Security Guard Pay & Bill Rate Benchmark Report. In this white paper, we took quantitative real-world pay and bill rate security guard company data from hundreds of private security firms across the United States to give you a deeper understanding of current rates. To download your free copy, click here.