026: How to Deal with a Repeat Loiterer 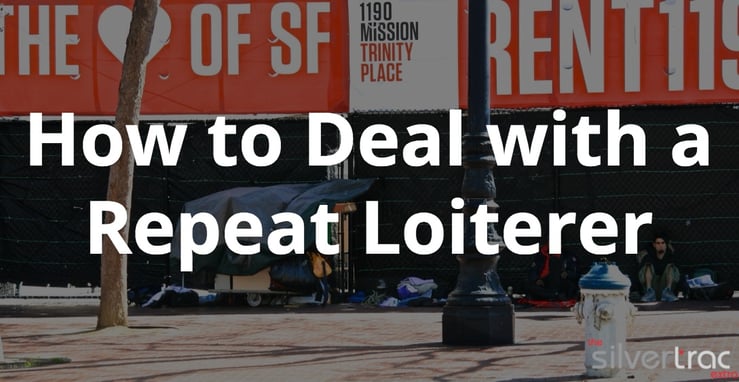 On today’s episode, we discuss an issue that has become increasingly important in the security industry: how to deal and get rid of a repeat loiterer. Loitering has become a growing problem for residential and commercial properties across the country in recent years, and as such has become a rising incident issue for private security companies.

However, FBI statistics show that arrests for curfew & loitering violations have declined significantly over the past few years. Customers now expect security guards to handle these situations on their own, taking care of loiterers without involving the police if possible. We’ve come up with a few security guard tips to help deal with repeat loiterers in this week's podcast.

Obviously, this advice applies to everything a security guard does, but it becomes especially important when talking to loiterers, most of whom will be people who are homeless. You don’t know if the person you’re talking to might have a mental illness, or a substance abuse problem, and so it’s vital to not do anything that could escalate the situation.

Start by politely addressing the individual from a safe distance, informing them that they need to leave the property unless they have a specific purpose for being there. Don’t start off confrontational, simply make it clear that they need to go somewhere else.

Some loiterers may move at the first request, but many will ignore or resist initially. To keep the situation from becoming confrontational, you want them to see you as someone trying to help them, not just a uniform kicking them to the curb. To do this, you need to approach the situation with the right information.

“Have some shelter and community resource information available,” says Johnny. “Know where the local shelters are, know where they can get a hot meal, know where they could potentially get a shower, and use those as ways to hopefully develop a rapport.”

Giving people these resources, showing them there’s a better place to go, can be much more effective than threats. Of course, sometimes even this won’t work, and it might take the threat of police intervention to get them to move. In these cases, it’s important that you know the city ordinances on loitering and panhandling. You don’t want to call the police only to find out they’re not breaking any laws.

If it becomes clear that the situation is escalating and you will need to get the police involved, make sure to gather as much information as possible. Important details to note include:

If you do end up having to call the police, that doesn’t mean your job is done and you can just pass it off to them. Remember, this almost certainly ranks low on their list of priorities, and it’s certainly not a job any police officer is going to get excited about doing.

“When I was a cop, the last thing I wanted to do was stick somebody dirty in my car and drive around eight hours after with the smell of this guy in my car,” I tell Johnny. “I was not thrilled to go to this call.”

Police will be much more likely to respond to your call if you give them detailed information, including notes and photos, the name of the loiterer, and any property damage, theft, defecation, or other issues that contribute to the situation.

But many departments won't respond unless a criminal act is actually witnessed. According to California Penal Code 647(h), loitering may be considered by criminal if these additional elements are in place:

If you don’t want to rely on the police, or they can’t do anything to help you, then there are some unconventional methods I’ve used to encourage people to leave the area:

Ultimately, though, the best advice we have for dealing with loiterers is also the simplest. “Use common sense, be courteous, and treat people like human beings,” says Johnny.