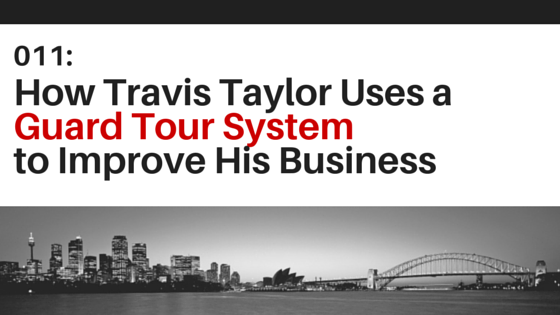 Travis Taylor joins us on today’s episode of the Silvertrac Extra. Travis has 13 years of management experience in the industry and currently runs a mobile patrol operation for one of our customers, and he shares how the Silvertrac Guard Tour System has improved his operation.

How He Uses The Guard Tour System

Travis loves the ease of use of the system, but the key element for him was the way it allows officers to tell the entire story of their activities, from recording the initial issue, adding notes and photographs, cataloguing their actions, and explaining the resolution. This is a useful tool, Travis explains, not just for the client, who can see the timestamps, notes, and photographs to put their mind at ease, but for the employees.

“It makes them more of an advocate for the property and the client,” he says.

Before the Guard Tour System, Travis and his officers were using a handwritten Daily Activity Report. He found that, since officers had to wait to get back to their vehicles before making their reports, they would often miss important details. For instance, officers that lock up a pool and kick out two people might forget to record who the people in the pool were by the time they make their report.

“The accuracy of the report and the timing of the report were two big elements of why we needed to get the system in play,” he says.

How It’s Changed His Operation

By improving the speed and accuracy of communication, the Guard Tour System allows Travis’ clients to become as active as they want to be in their security. They can easily see reports and have positive conversations with officers about the best ways to address certain issues.

These positive conversations replaced the negative conversations he used to have with clients that were upset about getting inaccurate reports or no reports at all, or feeling as if they didn’t even know the people guarding their property.

In addition to better client relations, the system made Travis’ own role in guard management much easier. In particular, he noted that it cut back the time he had to spend on site training guards by 50%:

“Before Silvertrac, I would have to take myself and the patrol division leader… and go out and show them the property… ‘They’re dropping trash over here, this is where the homeless hang out, here’s the pool, here’s the laundry room.’ All of those things can be transpired with Silvertrac in such a fast amount of time because of the ability to make notes and tasks.”

With GPS marking and notes, Travis can remind officers what they need to do and hold them accountable without spending valuable time riding around on site. With these tools in place, he has the confidence to send almost anyone out to a property and trust that they’ll take care of all the necessary tasks.

What Would Travis Say To Someone Considering The Guard Tour System?

“If they’re in the security industry, I’m going to tell them not to, because that will give them one up with me. But for everybody else, the system’s fantastic. I can’t put into words what it means when accountability, customer service, and timely processes in our industry all match at one time.”