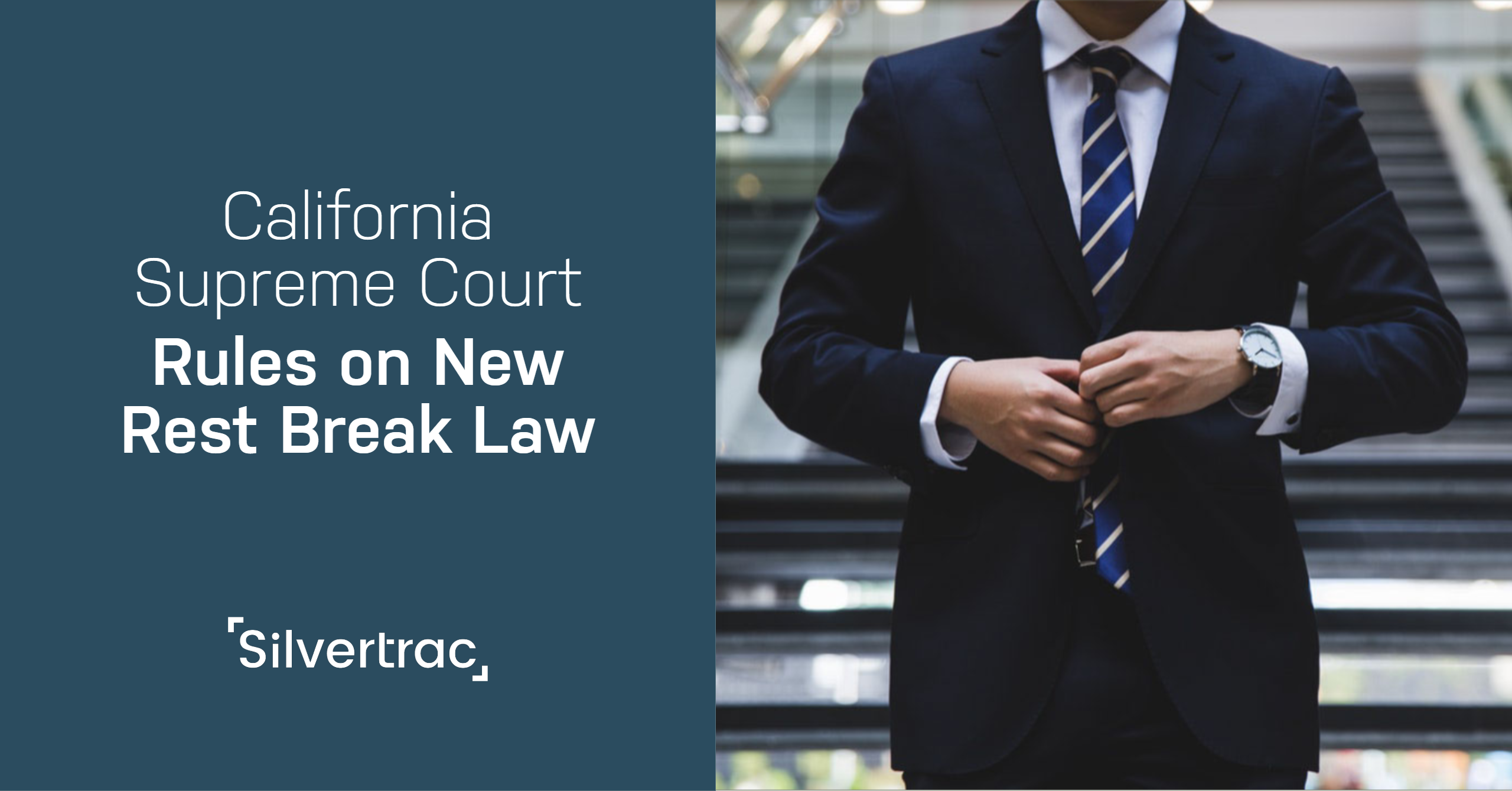 The California Supreme Court ended 2016 with a new ruling about employee rest breaks and the rights of employees during those. According to the ruling in "Augustus v. ABM Security Services" D.J. 12608 (2016), employees who are on a lunch or rest break cannot be considered to be on-call or on duty.

This is a particularly serious development in the security industry where it’s a common practice for guards to be considered on duty while taking a break.

The ruling is a result of a prominent case and a legal battle that’s been ongoing for 11 years. The Augustus v. ABM Security Services Inc. trial was finalized by granting the plaintiffs approximately 90 million dollars in damages on the grounds that the company violated state laws. The violation came in the form of asking guards to carry phones with them at all times, including during breaks.

Under California law, companies are obliged to provide employees with breaks and rest periods. Employees that work for more than 3.5 hours per day should be allowed to take 10-minute paid rest breaks every four hours. During this period, the employee is not supposed to do work.

ABM Security Services Inc. is a company that offers industrial, commercial and office security services. It employs thousands of full & part-time guards and company representatives acknowledged these guards were expected to carry a phone and answer calls even during their breaks.

In 2005, plaintiffs filed a class action complaint against their employer. The plaintiffs claimed they were not provided with uninterrupted breaks during the work day because they had to carry a phone and remain on-call for extended periods of time.

According to the court’s final ruling, ABM Security Services Inc. violated California laws with this requirement. The decision was taken with a five to two majority in California’s Supreme Court after the court of appeal concluded in 2015 there was no violation on behalf of the security company.

There were only two judges that dissented. Justices Carol Corrigan and Leondra Kruger concluded that workers being asked to carry a phone with them at all times does not quality as actual work.

How Employers Should Interpret the Ruling

Several important conclusions can be reached on the basis of the Supreme Court ruling.

According to the ruling in , "employers must (1) relieve their employees of all duties during rest periods and (2) relinquish any control over how employees spend their break time. They can’t be required to remain on duty or ready to take action upon necessity. Apart from the impossibility to keep employees having their break on duty, it’s also not legal to keep these workers on call.

While some consider the ruling to be pretty impractical, it simply offers the court’s interpretation of labor law in California. According to the judges, there are still a few areas that give companies a little bit of flexibility.

One way in which flexibility is preserved is that employees can be required to remain on company premises during their break. In addition, when the need arises, a company can ask its employees to reschedule their rest period. While this statement may sound reassuring, the court failed providing any additional information about how such eventual rescheduling could take place.

If it ever occurs for a worker’s rest break to be interrupted due to an emergency, the employer will either have to provide the employee with another rest break or pay an hour’s fee worth of penalty.

Because of the latest Supreme Court ruling, companies advised to review their rest policies carefully. Working with an experienced counsel in the field can help assess the company’s risk of financial lability and running into serious problems due to poor adherence to work regulations.

As with all matters concerning the legal process, our team at Silvertrac highly recommend speaking to your lawyer before making any changes within your company. This supreme court ruling should be taken seriously, so speak to your legal representation about how to best implement new rules, if necessary, to your employee policies.